There is something cruel and malignant in today’s Central Planning departments.  It is manifested in a desire to force everyone into “compliance” and “submission” to “The Plan” found in every city, county and state in America.  Perhaps you don’t think this matters to you, but you will be made to care eventually.

I recently wrote about a public meeting in Thurston County,Washington.  This isn’t the first, and it won’t be the last meeting where imperious elected officials collude with Central Planning staff and the community busybodies to impose aggressive and rapacious ordinances upon their neighbors.  Watching staff celebrate the harm inflicted on their community through their deceptive effort and toil is always a depressing experience.  Unfortunately, this also wasn’t the first time I have witnessed this behavior.  The Central Planning establishment seems certain the rules they impose on the rest of us, won’t apply to them in the future.

The property rights movement has produced endless white papers, articles, videos, and lectures  which detail the escalating destruction of rural communities and rural living initiated by bureaucrats, ideologues, and figurehead politicians.  Facts, figures, and trends clearly demonstrate the national impacts.  However, it is the individual human stories of dream destruction which touch the soul.  Each story of abuse is heartbreaking all on its own.  The challenge is how to tell these stories in a compelling way so that the as-yet-unaffected are motivated enough to wake up and engage before it is their turn to have their dreams destroyed, and there is no one left to care.

Six years ago, I became engaged in this fight.  I was fortunate enough to work for The Freedom Foundation, which, for a short time, supported producing Tales of Tyranny videos, some are linked at the end of this article.  Sometimes we were successful in reversing the abusive state.  Other times, we exposed the truth too late to make a difference.  Now I am honored to be Executive Director for the Citizens Alliance for Property Rights (CAPR), and there is still an endless number of similar stories which need to be shared with our neighbors, political leaders, and the rest of our communities.

At the Thurston County meeting one of the people testifying against adopting the proposed code enforcement ordinance mentioned how he had door-belled hundreds of rural residents, and he was certain that most, if not all, homes were technically in violation of one code or another.  The same speaker noted that few of these families were in an immediate position to “comply” with the rules, and the proposed fines would greatly harm if not financially destroy their dream of independent living entirely. His eloquent and thoughtful testimony was ignored, of course.   His observations matched mine, and I shared his concerns for my rural neighbors who are not prepared for the tsunami of fines, harsh government intrusion, and callused lack of regard for their dreams from the Central Planners.

Central Planners, Gang Green and those who profit from their schemes are successfully creating a world where they stifle human ingenuity by design.  Not by accident.  The tragedy lies in the corruption caused by their collective desire for power and control, often disguised by appeals to a mystical and quasi-religious view of nature combined with an apocalyptic view of humanity as a disease which must be contained (just listen to the pro-Big Government folk).  Those who actually live closest to nature are the first to be targeted.  The green religious fervor and/or the greed for tax profit is powerful, and compassion for those who they destroy is almost entirely absent. 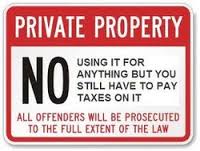 This issue is very personal to me.  The city folk who typically lead these Gang Green jihads and Central Planning schemes are impressively unconcerned about the human damage they inflict.  They rarely display human compassion at all.  The heart of a bureaucrat is hardened towards the undesirables.  Those of us who live rurally or even in the suburbs – we are all in the way of “The Plan”and our very existence is an obstacle to their schemes.  This makes us all "undesireable."

I was old enough to remember when my parents moved my siblings and I into the home which they had been building for a few years.  In our extended family (my dad was one of 9 kids), it was largely expected that you could build your own home.  Every part of it.  In hindisght, I realize we were poor, but my parents were willing to work hard.  They also were not intimidated by the challenges, and they had the grit to overcome the inevitable hardships.  When we moved into the “house,” we were still bucketing water from the well, our windows were semi-clear painter’s plastic stapled over window holes in the wall, and the door was a piece of plywood. Upstairs was a hayloft for the first few years, our stairs and deck had no handrails, and at night when us kids were asleep, my dad would continue finishing the electrical, plumbing, sheetrock, etc as time and money allowed.  30+ years later, I was the last one to move out of the house as it was demolished for a new subdivision in the no-longer rural City of Newcastle.  My Dad never did get a final certificate of occupancy for that house, yet it was a home for decades.

I am certain today my parents couldn’t launch their family into a rural farm/homesteading situation like that in our state anymore.  Sure, we had fresh milk from our cows, fresh eggs, a garden, and a lot of hard work fixing the place up, but there would be no acknowledgement, forgiveness or acceptance of this type of diversity of lifestyle from the Central Planners of today.   As part of the Progressive modern trends, our bureaucrats would impose $15,000 fines and drive a low-income family like ours into bankruptcy using every “tool” that an abusive government enterprise can invent or acquire.  This isn’t progress for anyone except the petty tyrants who profit from the harm they inflict on others.

People make the lifestyle choice to live rurally for many reasons. One common element is the desire to be independant and as unreliant on others as possible.  This means we might have a community of neighbors, family, and friends on whom we depend when times are tough or when a little help is needed.  But, mostly we find a way to do it ourselves or figure it out eventually.  It might not fit the picture-perfect Potemkin village image of peasant rural living the city folk want to see on their Saturday bike rides through the bountiful byways of the county.  However,  rural folk are not harming anyone, and we live mostly in harmony with nature and neighbors all around us.  It isn’t utopia, and nothing is perfect, but we like our lives.  We don’t want the cookie cutter condo living being foisted on us by others.  We aspire to prosperity, but we want to make a living and feed our families.  Sometimes we want to feed ourselves with the food we grow or hunt.  Primarily, and most of all, we want to be left alone.

Photo Caption: My Dad and I and our illegal home. Stapled plastic for windows, wood for heat, few permits

The Central Planners, Gang Green, and the rest of the crew won’t leave us alone, however.  They can’t help themselves.  Their will to power, money, and control drives them.  The inertia and utopian logic of their beautiful dreams and theories convince them that they know better than us how to live our lives.  Their dream becomes our nightmare, and they will never stop voluntarily.   Their desire to stifle human ingenuity, independence, and freedom at every opportunity can’t be exaggerated.

For 6 years now I’ve worked around our state with property rights activists from Seattle to Spokane.  I have helped many opposing the crazy “Friends” in the San Juans, the CRC fiasco in Clark County, and the Pocket Gopher silliness in Thurston.  Sometimes we have victories, and we have lost many fights.  In the end, we can win, but the solution must be political.  Exposing the truth should be a high priority for us – the apathetic can only be shaken from their slumber by the truth.  Confronting the cronies, crazies, and the bureaucrats who sponsor them must always be part of our plan.  If we don’t confront them, they just keep turning the screws tighter – and it will never be enough.  Finally, we must elect good, strong people willing to do the hard work to constrain, shrink, and ultimately erase the Central Planning State as we know it today.   After we elect them, we must hold them accountable.  When they do the right thing, we must support them.

This won’t be easy, and it won’t happen overnight.

However, I am optimistic that human ingenuity can prevail regardless of how hard they try to stifle it.  I wrote an article three years ago where I discussed the Dalby Waterwheel built by my Great Uncle Ed Dalby in 1922 in Union, Washington.  He didn’t get a permit or ask permission.  He just needed a way to get electricity to his home.  Today he would be fined, imprisoned, and his dream would be destroyed before it ever began.  Today, he would be stifled by seven different competing agencies, all looking for a cut of the action and an excuse to stop him.  Today, the Gang Green crew would protest, wail, and tell us all that the sky was falling.  Fortunately, for him and all of us today, those bureaucrats and the Gang Green crew didn’t exist back then.

Photo Caption: Dalby Waterwheel, built 1922 – Union, WA – no permits when it was built, no buffer from the stream, no bureaucrats got their cut, but still a tourist attraction nearly 100 years later and the world didn’t come to an end.

He built his dream, and it is a tourist attraction to this day.  Uncle Ed Dalby was buried in the pioneer cemetery nearby.  People still come from all over to photograph, paint, and visit his waterwheel  almost 100 years after he built it.  Nothing these Central Planners,Gang Green, or abusive politicians do today is going to be remembered fondly by anyone 100 years from now.

Note: This article is reproduced (in part) will full permission and approval from here.

Some of the Tales of Tyranny Videos:

Bert Wasch – Thurston County – No Home for you

Chris Weaver – Thurston County – A criminal for trapping a gopher

Nick Jones – San Juan County – No farm stand for you

Charles Dalton – San Juan County – No Blueberries for you

What happens when the Central Planners Fail?

Eventually, Everyone will laugh at the Central Planners of Today