CAPR Bills of Concern, Results on Wins and Losses 2021

Bills of Concern, Results on Wins and Losses 2021 (In numerical order)

The 2021 legislative session was exclusive and insular as legislators debated and passed bills with limited interaction from the citizens of the state.  CAPR did the utmost that could be done under circumstances that limited our ability to meet with and speak directly with legislators and other citizens in person at the capitol.  Even under these daunting and limiting conditions, Emails, phone calls, and getting the word out about bills through the CAPR email list was important in the work to direct legislators in consideration of proposed legislation.  Thank you to all communicating with CAPR for sharing emails, making phone calls, and calling and emailing legislators.  There was a good deal of bad legislation proposed and some bad bills failed, even as some very bad bills passed.

It is disappointing to have the kind of legislative sessions where our wins are the result of preventing bad bills rather than being able to focus on good legislative ideas that promote life, liberty, and property.  It is most certainly the result of elections and the consequences of those elections, the majority party had its priorities and life, liberty, and property were not among those priorities.  Your voices and efforts during session resulted in the wins we had, the prevention of bad bills.  Thank you!

Bill history links will take you to the legislative website where you can read bills as passed by the legislature, and importantly read the roll calls where votes from legislators are recorded.

1076 Allowing whistleblowers to bring actions on behalf of the state for violations of workplace protections.  This is a win!  CAPR opposed this bill which would create an open season of political, agenda driven, or agency enforcement lawsuits by any employed person.  This bill would have hit small business especially hard.  The bill did pass the House but not the Senate.  Link to bill history

1091 Reducing greenhouse gas emissions by reducing the carbon intensity of transportation fuel.  This is a loss, but not entirely, your calls to your legislators can still influence this bill!  CAPR opposed this bill which is called a “low carbon fuel standard” but is actually a road map to authorize the Washington State Department of Ecology to create rules (WACs) related to the carbon intensity of fuels, compliance obligations related to same, establish a credit system which will generate credits and deficits related to compliance obligations, and essentially creating a credit banking system.  Details of the bill can be read at this link for the bill as passed the legislature.  Of note, even if Ecology creates rules, the rules will not be able to be implemented because this section of 1091 did not come to pass at this present date, nor by session close: “ "additive transportation revenue act" means an act enacted after April 1, 2021, in which the state fuel tax under RCW 82.38.030 is increased by an additional and cumulative tax rate of at least five cents per gallon of fuel.”  Link to bill history

1099 Improving the state's climate response through updates to the state's comprehensive planning framework. This is a win! CAPR opposed this attempt to make the Growth Management Act further encumber property owners by adding additional regulatory taking under the guise of the climate needs of the earth and people.  Many regulations already encompass climate ideas, but this would have required planning to reduce vehicle miles traveled, zoning downsizing, climate mitigation.  A climate change and resiliency element would have been added to the featured main goals of the GMA, including reducing green-house gasses with specific targeted goals in certain cities and counties. It would have required Ecology to make like changes to the Shoreline Management Act and flood control plans.  It is a good thing this over-reaching bill failed, while it passed in the House, it failed in the Senate.  Link to bill history

1117 Promoting salmon recovery through revisions to the state's comprehensive planning framework.  This is a win!  CAPR opposed this bill adding a salmon recovery goal to the Growth Management Act.  The bill would have increased project mitigation standards from “no net loss” of environment or species to “net ecological gain” on certain projects and added a salmon recovery goal to the GMA featured goals.  The present standard of no net loss on projects carries mitigation requirements for environmental impacts, changing that standard to a net ecological gain standard regulates mitigation beyond the impact of a project, requiring enhancement of environment or species.  Net ecological gain would become an arbitrary goal and standard while ignoring and dismissing nexus and proportionality in exactions or takings, a constitutional standard in past embraced by courts.  The bill failed, passing the House but not the Senate.  Link to bill history

1141 Increasing access to the death with dignity act.  This is a win!  CAPR opposed this bill which would have dramatically changed an initiative voters agreed to in 2009.  Voters approved the initiative because they believed safeguards and concerns about the possibility of abuse were addressed.  The bill would have stripped those safeguards.  This bill passed the House, but not the Senate.  Link to bill history

1152 Supporting measures to create comprehensive public health districts.  This is a loss.  CAPR opposed this bill, regionalization leads to loss of oversight and control by the regulated citizen. HB 1152 originally would have placed land use permitting decisions from local county wide health jurisdictions over to new multi county comprehensive health districts.  The bill would have repealed statutes establishing and operating local boards of health, local health districts, local district boards of health, and city-county health departments. This would include permitting for water and septic systems, but also crucial decisions made at the local level on a variety of “foundational health services”, as in just about everything the state Department of Health busies itself with, for example emergency preparedness and disease management.  The final bill left in place local health districts but created the other provisions in the bill as a created a state Public Health Advisory Board within the Department of Health, which will interact with local health boards.  The final bill was also opposed by CAPR.  If nothing else, the introduction and passage of this bill provides a good road map for those working to reform the over-reach of the public health authority given to the Department of Health.  There are glaring passages in these laws that are from another era, when government was an entity ruled by common sense, and the rule of law, not agenda building.  We must work with our legislators to restore and jealously guard property rights under all emergent circumstances.   The bill passed both the House and the Senate, opening a door for improvement in future sessions.  Link to bill history

1157 Increasing housing supply through the growth management act and housing density tax incentives for local governments.  This is a win!  CAPR opposed this bill intending to add a featured tax to property to pay for housing planning goals and decisions related to the Growth Management Act.  The bill authorized counties and cities to establish a real estate excise tax density incentive zone within urban growth areas and provides for the distribution of state real estate excise tax revenues within such incentive zone.  The bill failed, passing the House, but not the Senate.   Link to bill history.

1376  Concerning registration of land titles.  This is a win!  CAPR opposed this bill.  This bill would have done away with the registration of land titles, The Torrens Act, and would limit property owners to recorded title information only.  The bill would have made bureaucrat’s lives easier but would have done away with the protections land owners have under the process of registration of land title information, for example, The Torrens system eliminates having documents recorded against your land title without your knowledge because you have the certificate of title, signed by the Registrar of Titles and that certificate has to be presented in order to change the ownership, or further encumber the property – including assignments.  CAPR is pleased this attack against property owners’ protections and rights has for the second time, been defeated.  The bill passed the House, but not the Senate.  Sponsored by Representative Fey.  Link to bill history

5042  Concerning the effective date of certain actions taken under the growth management act.  This is a win!  CAPR opposed this bill which was intended to repeal the vesting doctrine as related to the Growth Management Act based on need due to climate change.  An oddly worded bill, it failed the Senate on March 17, and never reached the House.  The bills sponsors were: Salomon, Billig, Kuderer, Liias, Wilson, Claire.  Link to bill history.

5043 Providing housing to school district employees.  This is a win!  CAPR opposed this ill-timed special favor bill which promoted the idea of special levies for the purpose of providing housing to teachers.  At a time when many were facing job loss and threat to their economic structures as well as their homes, and at a time when most if not all school children were not attending in person teaching, and many families objecting to targeted teaching on subjects of race and sex ed, this bill was incredibly tone deaf and took an awful lot of brass or pure desperation to introduce.  It passed the Senate but did not make it through the legislative process for a hearing on the floor in the House.  Link to bill history

5096 Concerning an excise tax on gains from the sale or exchange of certain capital assets.  This is a loss!  The income tax that wasn't an income tax!  Of course CAPR opposed this bill.  It was pitiful to watch the extended debate on this bill knowing thousands had called in opposition to this income tax bill.  Never the less, there were some wild contortions on the floor debate as to what was being passed, and yet the will to pass this bill was straight partisan and was done so by the Democrat Majority.  Subsequently Governor Inslee was eager to sign this bill even while knowing it would go to court, as has been proven by the filing of suits even at this early date.  Was the goal the tax or the court determination?  Link to bill history

Bonding, appropriation, and “additive” transportation funding (5 cent or more fuel tax) bills were required to pass in order to complete the tie-in of bills passed (1091 and 5126) for the Inslee and Democrat legislative majority “Green Bargain” to be implemented.  1091 and 5126 were passed but lack the funding and appropriation bills link to become active and implemented.  Watch for the next legislative trick, a “special session”.  Governor Inslee needs an out to end his emergency tyranny and somehow save face, so he needs those on his side of the aisle to put on a show to demand amendment of emergency powers or end the emergency.  This will be the call to session, but the intent will be to pass the missing Green Bargain Bills.  This is a political spectacle worthy of attention, how, or will emergency powers act be amended?  Will the missing pieces of the Climate Commitment Act be passed or be traded for restoring individual liberty?  Will this need to happen before the June 30 appropriation deadline?  Keep in touch with your legislators so they know where you stand on any special session horse trading.

There are numerous other bills of concern CAPR listed and acted on this session, here is the complete list. 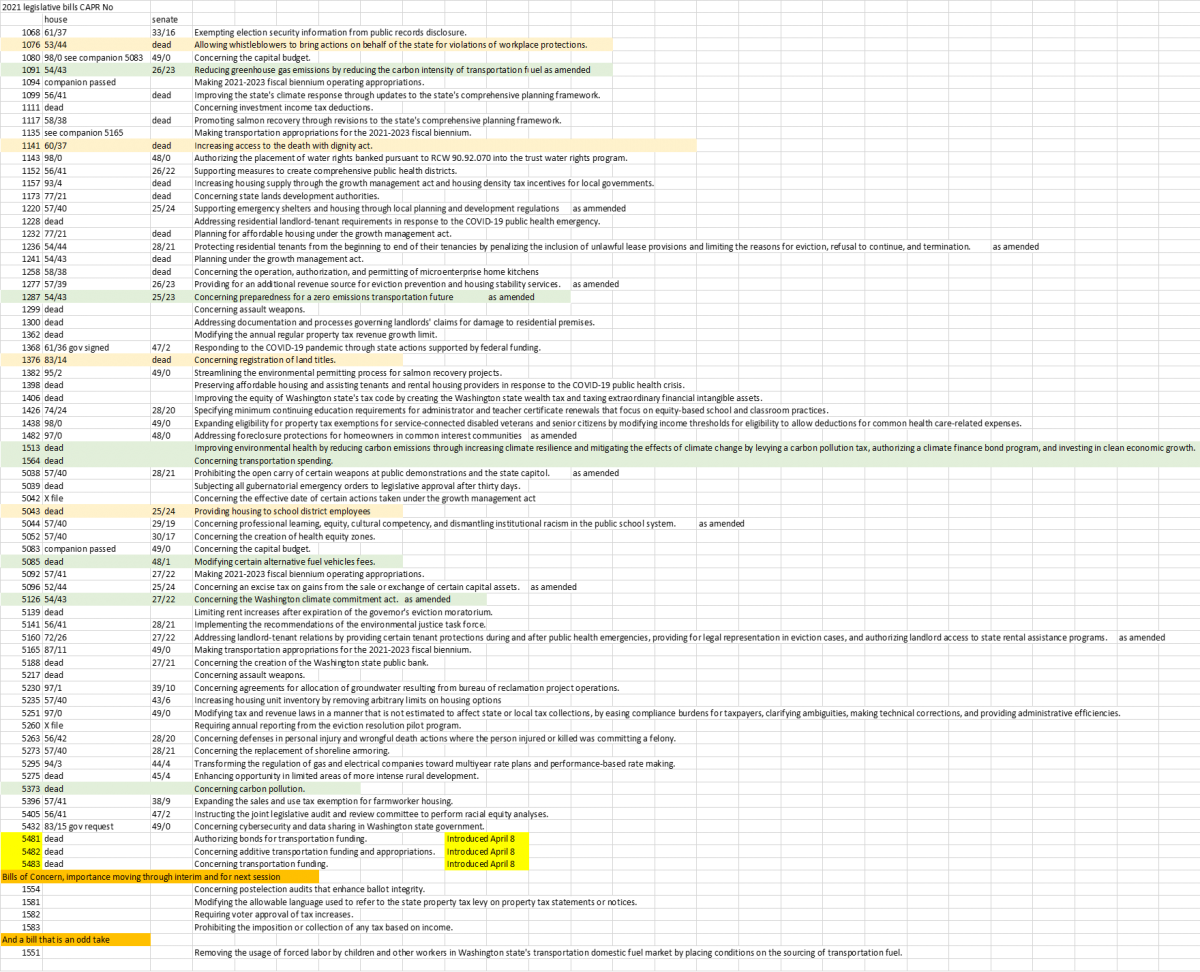