Yesterday, the Washington State Legislature started the new Legislative session with great ceremony and fanfare in Olympia.  On the first day of session, every year, the legislators walk down the aisle, Democrats on the left, Republicans on the right as they stride to their respective seats.  The flag ceremony, the anthem, new leadership sworn in, newly electeds recognized by their peers, and the visitor’s gallery is filled to capacity.  Thus begins the clock for the countdown to the end of the “short” session.  Every second that ticks by, a certain sense of urgency grips the state.  From long, painful experience we know our freedoms and our pocketbooks will not be safe as long as the legislature remains in session in Olympia. Most people are hoping this session will indeed be “short” and adjourn on time in early March, because in the words of Gideon J. Tucker, “No man’s life, liberty or property are safe while the Legislature is in session.”

However, there was unfinished business from the “long” session in 2017, and one of the more controversial issues to resolve was how to respond to the “Hirst Decision.” In fact, the first hearing scheduled in the State Agriculture, Water, Natural Resources, and Parks Committee was dedicated to SB 6091, which was misleadingly titled “ensuring that water is available to support development.”  It was trumpeted by Washington State Democrats as a “Hirst Fix,” but the details in the proposed bill (linked here), fixed nothing.  However, they do make the damaging fallout from the Hirst decision worse.

The Hirst Heist – inventing legislation by the Supreme Court

Futurewise claims to be an “environmental” organization, but appears to just enjoy forcing people to live the way their wealthy donors demand and they clearly relish the harm they inflict on the poorer residents of this state.  In fact, based on the testimony at this hearing, Futurewise, Sierra Club, and CELP (another part of Gang Green) seemed to try to outdo each other in an effort to demand even greater pain and suffering be inflicted on the property owners of the state. Their collective minds were angered by the possibility that property owners would be allowed to water gardens or even have enough water to live outside of urban apartment complexes. 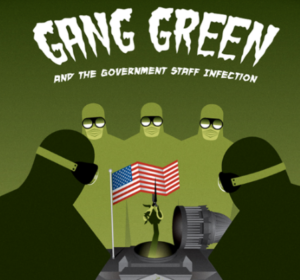 The Washington State Department of Ecologywas involved and strongly supported this bill, of course, in no small part because the $200 million bonded debt would help inspire another DOE spending spree on studies and “mitigation” grant scams around the state.

Director Bellon was more circumspect this time around than she was in her testimony December 12th when the first proposed draft of this harmful bill was unveiled.  At that hearing, Director Bellon was rightfully castigated for offering to find a “modicum” of water which she would deign to “allow” chosen property owners to have.  Maybe.  If she thought them worthy.  These agencies will tell you what they really think if you pay attention.  In their world, we are all just peasants and perhaps they will let us eat cake with a drop of water or two.

One of the more obnoxious aspects of yesterday’s hearing (video link here) was the fact that the hearing room was filled past capacity with standing room only and the Senators were nowhere to be found.  Apparently there was a Senate rule fight (The new Democrat Majority couldn’t find 25 votes) the first few minutes of the legislative session and the people who had driven many hours from Spokane, Whatcom, Kitsap, King, and Skagit counties had to twiddle their thumbs surfing their smartphones for over an hour before the Senators showed up.  This is an uncommon occurrence, and it was pretty insulting to regular citizens.  The lobbyists and special interests can hack it – they get paid to do so.  However, for the regular citizens whose freedoms and future are so casually trampled by the bureaucrats and politicians, this was not a great way to start the session. A variety of organizations were strongly opposed to the bill including Citizens Alliance for Property Rights (where this author is the Executive Director), Kitsap Alliance for Property Owners, the Farm Bureau, and a variety of building and agricultural groups.  All property owners who attended and spoke at the hearing were opposed.

Of course, sometimes you just have to step back and look at this whole “water crisis” and see it for what it is.  A manufactured “crisis” about nothing real, but a lot of special interests believe they can use it to their advantage and profit.

Are we really running out of water?

Let’s look at the “water crisis” which the “enviro” groups claim is upon us.  Are we really running out of water?  On a planet-wide basis, of course not.  Despite the lack of education on the subject, and purposeful science-denying ignorance being fostered by the environmental special interests, nature has been recycling long before it was cool and a part of a virtue signaling lifestyle.  The water cycle ensures that between evaporation, precipitation, gravity, and other natural functions, our water stays on our planet and with the possible exception of our space program and the occasional alien conspiracy theory, we can use it to survive and thrive forever. 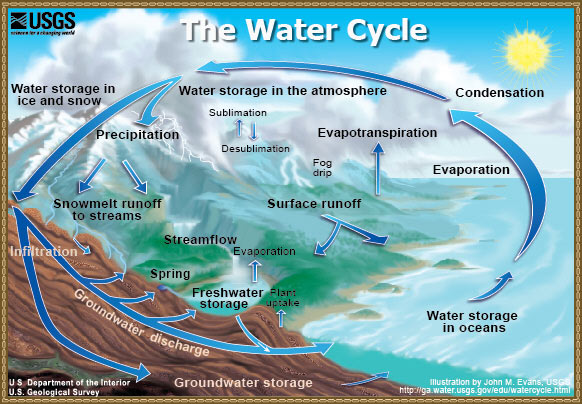 In addition to the water cycle ensuring we keep the water we have on our planet, this chart below also clearly illustrates the absurdity of the Hirst controversy. 71% of the surface of our earth is covered by water, and 96.5% of that water is salt water in our oceans. Only 2.5% of the water in the world is considered fresh water.  Of that 2.5%, about 68.7% is frozen in glaciers or the ice caps.  Over 30.1% is in the ground, and only about 1.2% is considered surface or other freshwater.  Of that 1.2%, only 0.49% can be found in rivers and streams. 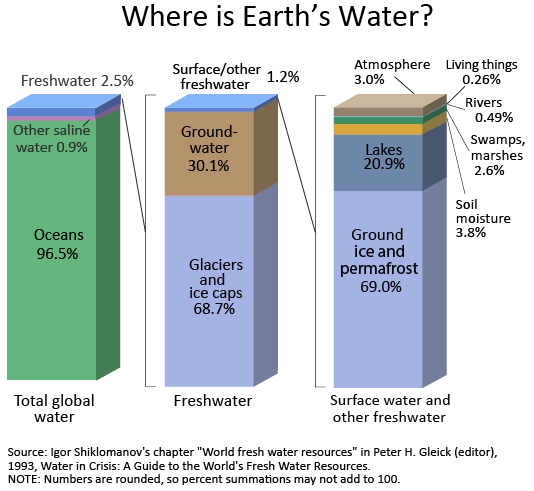 And if that’s not enough water, consider some recent findings reveal that somewhere between one to three times the world ocean’s equivalent of water is locked-up in the mantle transition zone from 410 to 660 km deep. So our world is literally saturated in water, yet because of the state’s terrible Supreme Court “Hirst” Decision we are fighting over a tiny microscopic percentage of surface water, which thanks to the water cycle, is seasonally flowing in our streams and rivers.

Fake science leads to stupid policy and even worse legislation

We all appreciate this water, but due to some very faulty and fishy pseudo-science and sloppy studies from the 1970s through the 1990s, an effort to catalog “minimum instream flow” was invented and assigned to many of these rivers and streams.  Few questioned the validity or significance of these taxpayer subsidized studies at the time.  Without much attention paid to seasonal changes, natural climate change, or historical realities, the opportunity to use this data as a way to invent a permanent, frozen-in-time statistic, this faulty data is now used as a club to beat rural property owners.

Since rural property owners used permit exempt wells to survive, water their animals, water their gardens, and live, and they wer

e dispersed across the landscape, they would be the first victims of the new “water crisis.”  After all, they take water deep from under the ground.  Perhaps, over time, some of those molecules of water removed by a rural well could have a molecule of impact on a stream or river somewhere.  Maybe.  It can’t really be proven, but computer models insist it is so. In fact, a court decided that if it was even distantly possible, it must be a “threat” to the water level in the river and therefore of the salmon swimming in that river.  Despite the fact that under almost all serious reviews, the total exempt well water usage in Washington State is at most less than 1% of the total water being used, THIS, above all else, must be stopped.  It must be regulated.  It must be reduced.  It must become a source of profit for the water bankers. 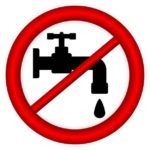 rdity has only expanded from there.  Like a bunch of ravenous hyenas, a variety of special interests are seeing green in the ability to steal water from the rural property owner, despite the de minimis impact they could ever conceivably have on the salmon habitat.  These special interests are primarily driven by Gang Green (Futurewise, Sierra Club, CELP, etc), their temporary allies the Tribes (particularly the Swinomish, Lummi, among others), the Department of Ecology (anything to grow the budget, power, and size of the agency), and water speculators hoping to profit from water banking and mitigation schemes around the state.

But let’s back up and challenge some of those initial assumptions on which Hirst was decided. Remember that 30.1% of ground water mentioned above? The vast majority of that water flows sub-surface into the ocean, not rivers and streams. The Hirst decision blatantly ignores that fact. You can’t make a decision about where water “should” go if you don’t know where it actually goes. So when rural property owners use wells to lift water from a confined aquifer to the surface, they are actually increasing instream flow, not reducing it. This is a to 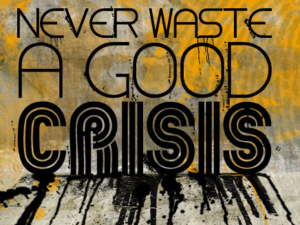 tally ignored aspect of hydrology, which needs to be disclosed and discussed this year when considering Hirst “fixes” in the legislature.

There is no water crisis.  We have plenty of water and in most cases rural wells are helping, not harming, instream flow.  However, in those cases where a shortage might exist in some specific location,  engineering solutions can be found.  They are genuine challenges that can be met and solved through human ingenuity and problem solving.  However, the profiteers and grifters who support Hirst wouldn’t be in business if they solved real world problems.  The legislature is in session, and our freedoms and pocketbooks are at risk, and the jackals are circling.  They have donated cash to most of the Democrats to ensure they get their way and their profits.  So abusing poor and helpless rural property owners seems like a safe and cheap bet.  Anything honest legislators can do to stop the Hirst Heist in progress right now would be greatly welcome. 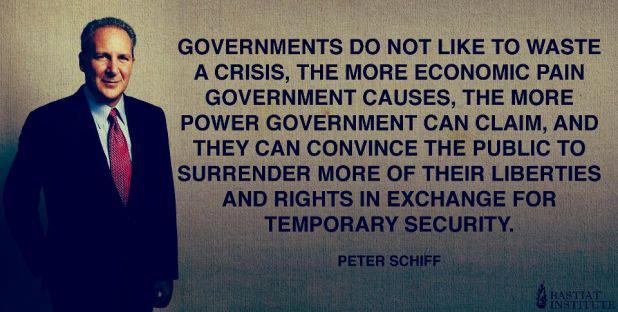 If link to Supreme Court is down or they hide the case, you can also download it here

SB 5239 – Senate bill which did pass Senate only – which would partly, temporarily address Hirst (passed on mostly partisan vote) (2017)

Other Commentary on Hirst Decision:

Spokesman Review – “Landowners need more than a ‘modicum’ of water”

The Hirst Heist and our diminishing legislature

The Daily World:  “Hirst decision is about control, not water”

Capital Press:  Fallout over Water Ruling Heats up in Washington

Washington Policy Center:  Washington Supreme Court takes the liberty to make a policy decision it should not have made